The Future of TELEHEALTH is NOW! 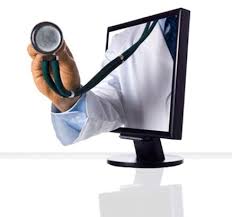 The idea that a health care provider could diagnose and treat a patient via teleconferencing technology was a concept more at home in the Star Trek™ realm than what is now an increasingly commonplace event.

Patient consultations currently take place via video conference, e-health including patient portals, remote monitoring of vital signs, sleep studies at home and cardiac monitoring during the patients’ work day are common.  While there are many other applications,  (ATA, 2015) “all are considered part of telemedicine and telehealth”.

There are a great many questions regarding reimbursement, regulations, infrastructure and access as well as provider and patient adoption and whether these will fall into a viable alternative to face-to-face health care.  There are a great number of barriers that need to be overcome for telehealth to enjoy parity with inpatient visits.

With the shortage of health care providers, particularly in primary care, congressional and media attention over the past year has increased dramatically.  According to a Georgia Public Policy Foundation study, without telehealth, patient access might be delayed, denied or otherwise not available.  (Bachman 2015) reflects patient savings in time and money and reduction of stress from delayed or denied face-to-face medical care. 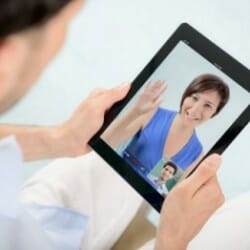 The Affordable Care Act has brought millions of people into the healthcare system, and currently 44 states have telehealth legislation pending.  Bills are being debated in committees for eventual introduction in Congress. There is also greater media attention highlighted on network TV and radio news shows to include blogs within the online community of health care providers and patients.

There are concerns regarding whether or not patients will readily accept telehealth alternatives, but these are essentially unfounded.  Most of the population has grown along with online technology, which includes user friendly programs that assist with reliable practice.

Elderly senior citizens may face some challenges using digital tools, a Pew Research Study (Smith, 2013) found that, “Six in ten seniors – 59%- report using the Internet.”  This percentage has been increasing by 6% over a similar point annually.  In fact, the rate of adoption of social media among those age 60 and over is the fastest growing segment of the marketplace.

Concerns about reliability of data to inform the provider is mitigated by ongoing advances in the industry making telehealth technology the cutting edge of innovation.   Higher video and image resolution, efficient use of bandwidth has made connectivity more reliable with electronic health record systems facilitating the increased data exchange (iHealthBeat, 2013).  Real time IT-enabled transfer of patient monitoring has evolved sufficiently to support telemedicine platforms. (Darves, 2014)

Scientific studies in the area of telemedicine and quality of care “indicate that the use of telemedicine for such applications as monitoring of chronic care patients or allowing specialists to provide care to patients over a large region have resulted in significantly improved care.  For most telemedicine applications, studies have shown that there is no difference in the ability of the provider to obtain clinical information, make an accurate diagnosis, and develop a treatment plan that produces the same desired clinical outcomes as compared to in-person care when used appropriately”.  (2013 American Telemedicine Report, Telemedicine’s Impact on Healthcare Cost and Quality) 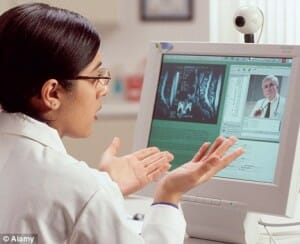 The same report found that the vast majority of the peer-reviewed research studies about the cost effectiveness of telemedicine (based on large sample sizes and following sound scientific rigor) are relatively new but are consistently concluding that telemedicine saves the patients, providers and payers money when compared with more traditional approaches to providing care.  An August 2014 study by global professional services company Towers Watson estimated telemedicine could potentially deliver more than $6 billion a year in health care savings to U. S. companies (Towers Watson, 2014).

Reimbursement has been a thorny issue in telehealth.  There is a wide discrepancy between how to pay in comparison to traditional in-office visits.  (U.S. Department of Health and Human Services Health Information Technology, 2014).

Health care provider regulatory bodies are just getting started in the process of interstate practice, NCSBN’s Nurse Licensure Compact (LNC) has been ahead of the curve since implementation in 2000.  The NLC allows RNs and LPNs/LVNs to have multistate licenses with ability to practice in their home state and other NLC states.  Currently there are 24 states in the NLC.  BONs (Boards of Nursing) have been actively involved in revising the NLC to ensure it reflects best practices and provides public protection and continued high standards.  Several organizations are actively involved in compiling state by state telehealth nursing licensure requirements similar to what is available for physician requirements.

Telehealth is a concept waiting for all of the factors influencing its acceptance as part of the health care delivery system to align.

Darves, B. (2014). “Technology advances boosting Telehealth, but changes to widespread use remain.”

Smith, A. (2013). “Older adults and technology use: Attitudes, impacts, and barriers to adoption.”

U.S. Department of Health and Human Services Health Information Technology. “What are the reimbursement issues for telehealth?”

Arizona State Board of Nursing Regulatory Journal, (2015), In Focus, Spring.

Disaster preparedness means knowing what type of disasters you might[...]

For the most part, retrieval of medical records is a[...]

Law firms involved in product liability cases must be well-versed[...]

Questions or Comments? Send us an email and we'll get back to you, ASAP.

Get Started with R&G, No Obligation, No Pressure Contact Us